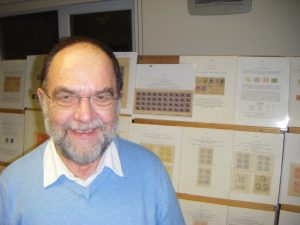 On February 15th Banbury Stamp Society welcomed Alec Jeffries who presented stamps from the Indian States, part of his collection built up since the 1970’s.  He gave a background to the postal service in India: by 1900 the British ruled about 60% of India, with the remainder ruled by Maharajahs who were able to set up a postal service within their own state.  This worked by using local stamps for letters within the state, and then the Empire stamps needed to be added for mail going out of the state.  We started with the state of Jaipur.  In 1621 the Maharajah required all districts to send daily written reports to him and had set up a messenger service to handle them.  Alec showed an example from 1715.  By the 1800’s the service had been opened for public use, with a handstamp indicating whether the letter was pre-paid or a pay on delivery.  The first stamps issued in 1866 were a local overprint of the Imperial postage stamps, and these were to have been replaced in 1904 by a Jaipur State issue, printed by Perkins Bacon.  When this was late arriving, a stamp depicting the Hindu sun god Surya was designed and printed locally.  The last stamps were printed in 1947 to celebrate the Maharajah’s Silver Jubilee of his accession to the throne. 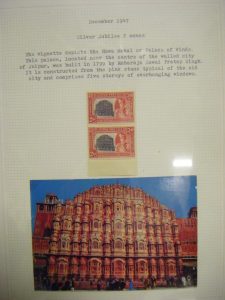 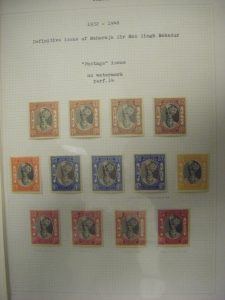 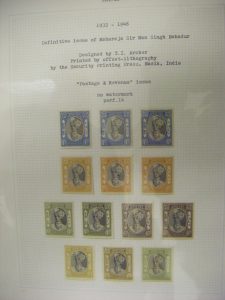 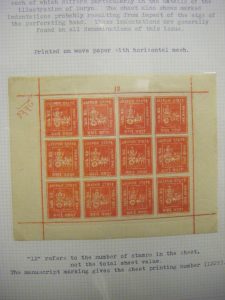 In the second half we saw issues from Bundi, Soruth, Nawanagar, Bhopal and Orissa and Alec described the research into cataloguing varieties of early issues from these areas. 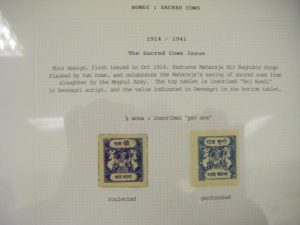 The next event will be the Robson Cup competition to be held on Tuesday 1st March 2022 at 7:30pm at the Hanwell Fields Community Centre. The Banbury Stamp Society is on-line at ‘www.banburystampsociety.co.uk’, or contact John Davies on 01295 255831.