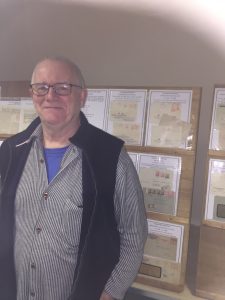 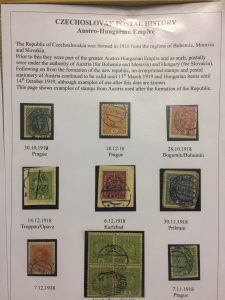 Czechoslovakia as a country existed from 1918 to 1993, but Les started with some early postal history from parts of the Austro-Hungarian Empire that eventually became Czechoslovakia. His earliest cover was from 1621, from Prague to Vienna. Early letters were between people who could afford the expensive postal rates – government, church, or the army. We then moved to stamps from the Austro-Hungarian Empire which could be identified from postmarks. These stamps were used up to 1919, the year after the formation of Czechoslovakia.

During the Great War, Czech and Slovak soldiers were fighting against the Entente (France, Russia and Britain) and we saw soldiers’ letters written from the front.

Czechoslovakia emerged from the collapse of the Austro-Hungarian Empire at the end of the Great War and overprinted the Empire stamps until it issued its first stamps in 1919. These, and many others, were designed by Mucha and featured the first President, Tomas Garrigue Masaryk.

Czechoslovakia was invaded by the Axis forces at the start of WW2 and we saw a range of material from the troops and airmen in exile – first in France and then in Britain Airmen were rapidly taken up by the RAF, but the soldiers spent a number of years moving around Britain training until they joined the US 5th Army soon after D-Day.  A significant event during the occupation was the Nazi massacre in Lidice, as reprisal for the assassination of Reinhard Heydrich, the regional Governor.  A number of commemorative labels were issued.

The next event will be ‘Yugoslavia 1918 to 1945’ on Tuesday November 30th at 7:30pm at the Hanwell Fields Community Centre. The Banbury Stamp Society is on-line at ‘www.banburystampsociety.co.uk’ or contact John Davies on 01295 255831.