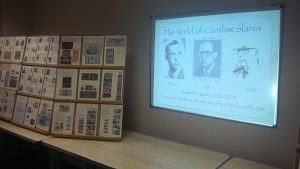 On Tuesday October 17th, Banbury Stamp Society welcomed Colin Searle as their guest to talk about Czeslaw Slania, famous as an engraver and, in particular, for engraving a large number of stamps between 1950 and 2004.

Colin’s presentation used a projector and Powerpoint which allowed him to show enlarged scans of examples of the material, alongside a wider range of the actual stamps. His first task was to explain how to pronounce Slania’s name, and he then went on to introduce us to his subject. Slania was born near Katowice in Poland in 1921 and joined the Polish resistance as a document forger before formalising his career after the war. His first stamp engraving was for the Polish post office, which had the unfortunate mistake in that the designer provided the portrait of the wrong person for the stamp!

In the 1950’s, Slania looked to emigrate to the UK, but was not allowed in as he did not have a union card, and so he moved to Sweden where, in 1972, he was appointed as the Swedish Royal Court Engraver.

Colin showed a range of Slania’s work, highlighting both the quality of the engraving and the amusing details. Slania put himself in a number of stamps: fitting a wheel on a car on the production line, leading a ski race.

Slania produced 1,070 engravings for stamps which were used in 1,578 different stamps for 31 countries. British collectors may best remember the se-tenant set in 1984 commemorating the first mail coach run; his last British stamps were letter boxes in 2002 in the ‘Pillar to Post’ set.

Banbury Stamp Society meets on the first and third Tuesdays of the month at the Hanwell Community Centre from 7.30 to 9.30pm. Visitors are welcome. Their next meeting is on Tuesday 7th November on South Pacific Airmails. See the society at ‘www.banburystampsociety.co.uk’, or contact John Davies on 01295 255831.