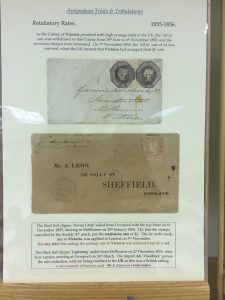 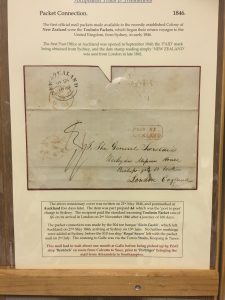 On Tuesday October 19th, Banbury Stamp Society met at the Hanwell Fields Community Centre.  The guest speaker was Clive Jones, and the topic of his presentation was ‘Antipodean Trials and Tribulations’.

This could be described as the history of communication between Great Britain and the colonies in Australia, New Zealand, and the Pacific Islands, illustrated with fine examples of the covers that carried the letters and thoroughly researched and documented.  The trials and tribulations covered everything from the high cost of the service, shipwrecks, war, and even pestilence as well as dubious shipping contracts.  Over the period of the display, the transit time for a letter reduced from 166 days (which meant a year between sending the letter and getting the reply) to 55 days.  The costs went down from over 5s to 2-1/2d, in the main by the introduction of uniform postage rates.  The service over the sixty-year period (1830-1890) was provided by a varied range of vessels, not always improving with time: sailing ships went with the prevailing winds with the outward journey round South Africa and the return via South America.  Introduction of steam meant that the route became out and back – but early coal supplies were not always reliable, and with the start of the Crimean war, all the best vessels were requisitioned for war service and the service went back to the sailing clippers.  The Post Office went to tender for the service and when they went for the cheapest offer, got some pretty poor ships until they finally agreed to a service provided by the P & O line.  Routes shortened with the opening of the Suez Canal, and, for additional cost, a few more days could be saved by sending mail overland from Marseilles in France or, later, Brindisi in Italy.  Other routes that were illustrated were to Panama and across the isthmus by mule train – the Panama Canal not yet having been built.  This route did not last long because of the high mortality rate from Yellow Fever.  Another route was via San Francisco and across the USA on the newly completed railroad to New York. In the 1880’s refrigerated ships started to bring lamb from New Zealand to Great Britain and this provided additional vessels to carry mail. We finished with a registered court summons from Dundee to New Zealand, returned when the recipient declined to accept it – a round trip of 27,000 miles.

These fascinating covers showed all the postmarks, route endorsements and transit marks, and to top it off, some remarkable examples of the stamps in use over this period.

The next event will be ‘Austria and Hungary – The end of an Empire’ on Tuesday November 2nd at 7:30pm at the Hanwell Fields Community Centre. The Banbury Stamp Society is on-line at ‘www.banburystampsociety.co.uk’ or contact John Davies on 01295 255831.