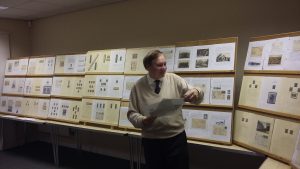 On Tuesday February 21st, the Society welcomed Mr. Alan Spencer from Birmingham who gave a presentation of Canadian philatelic material from the period 1911-1930. Alan described how he came to collect Canada: as a schoolboy there were two collections on sale at his local stamp dealer, and the Canadian one was the less expensive!

Alan started by explaining the title of the display: the Admiral Period. When King George V came to the throne, Canada introduced a new definitive design and as the King was portrayed in naval uniform, the issue became known as the Admiral issue, and it formed the definitive issue from 1911 to 1930. Alan showed the range of stamps and formats for this issue – sheets, coils and booklets – and had some unusual and scarce material.

Alan also showed a range of other philatelic material from this period. As well as the commemorative issues, he had a number of sheets of material covering the First World War and its aftermath. Along with mail to and from serving Canadian soldiers, Alan had Prisoner of War Mail from both sides – German mariners held in eastern Canada back to Germany, and covers from Canadian soldiers held in Germany. He also told the story of how the Canadian soldiers rioted over their living conditions in North Wales as they waited to be repatriated after the end of the war. Another interesting cover was from a Canadian soldier in Vladivostok where Canada was supporting the Tsarist regime in the revolution of 1919.

After the war, returning airmen helped create flying routes across Canada, most of which carried mail and there was a range of commemorative covers with private air mail labels.

The Society will be holding their Annual Dinner on Tuesday March 7th. The next meeting will be on Tuesday March 21st at 7:30pm at Hanwell Fields Community Centre when there will be two presentations: A Philatelic Autobiography’ and ‘Separate Studies of Japan’. The Banbury Stamp Society is on-line at ‘www.banburystampsociety.co.uk’, or contact John Davies on 01295 255831.