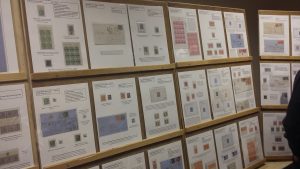 The display did contain examples of all of the stamps; but backed up with a wealth of material which included used examples on cover, Post Office notices from the period announcing new rates and new stamps, and also essays, die proofs and colour proofs – all either printers archive material or material submitted to the Inland Revenue for approval of the designs. Much of the material on display was sufficiently rare that the only other examples are in the British Postal Museum Phillips collection or in the Queen’s collection. We heard how King George V acquired some of the material for the Royal collection. He was a keen philatelist and the story goes that he went to Somerset House and personally cut up some of the imperforate sheets to add blocks to his own collection.

We were told how the corners letters developed. These had been a feature of the 1d red line engraved issues, but when the new designs were proposed, the corner letters were left off because they made the design looked cramped. However, the Inland Revenue insisted, for security reasons, and so the small white letters were added. Unfortunately these were too small to be read easily by gas light and so they were made larger. The white letters were engraved separately onto the plate, a time consuming process and it was proposed to use plugs to add the letters, and these became the large coloured letters. It also lead to occasional errors when the plug fell out and was replaced with the wrong letter. The effectiveness of the corner letters as a security measure was not great: a number of stamps were forged in what became known as the Stock Exchange Forgery. Despite having impossible letter combinations, they were not discovered until 20 years later! Bob also showed other forgeries, in particular the 2s brown which had a short print run as the colour was changed to meet Universal Postal Union (UPU) regulations. A number of European forgers made copies in the early 1900’s to sell to philatelists. Bob explained that one technique to fool the buyer was to bleach the ink of a cheaper stamp and then reprint with the rarer version.

The next meeting will be on Tuesday December 5th at 7:30pm at Hanwell Fields Community Centre when members will be displaying covers of interest and also bringing along material to sell. The Banbury Stamp Society is on-line at ‘www.banburystampsociety.co.uk’, or contact John Davies on 01295 255831.