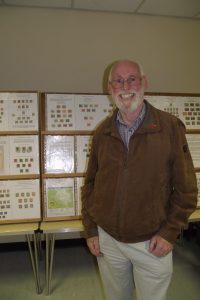 On November 2nd, Banbury Stamp Society welcomed John Harden as guest speaker on the topic ‘Austria and Hungary – The end of an Empire’.

John’s displayed stamps from the break-up of the Austro-Hungarian Empire at the end of the Great War. As new countries emerged, they took the stamps that were available and overprinted them in various ways to proclaim the new governments. The stamps are a complex field as overprints were carried out at local printers with many errors as well as forgeries. The geopolitical history of the time is even more complex, and John shed a great deal of light on what happened, and why the aftermath still resonates today.

We started with the ‘dual monarchy’ of the Emperor Franz Josef: Emperor of Austria and King of Hungary. The stamps bearing his head formed the core of the display. The Empire had grown though incorporation of many of the Slavic states after the collapse of the Ottoman Empire, but the 20th Century saw a rise in the concept of nationhood and many countries had active independence movements often mixed with the rise of socialism.

Two examples of events that lead to some of the stamps on display:

During the Great War, Italy sided with Britain and France, mainly because it had territorial ambitions on the lands around Venice and Trieste. The battlefront went back and forth leading to multiple occupation issues.

At the end of the war, Austria issued several sets of stamps to raise funds to finance a border dispute with Hungary – the Versailles conference settled it by dividing the disputed lands down the middle.

The next event will be ‘Czechoslovakia’ on Tuesday November 16th at 7:30pm at the Hanwell Fields Community Centre. The Banbury Stamp Society is on-line at ‘www.banburystampsociety.co.uk’, or contact John Davies on 01295 255831.