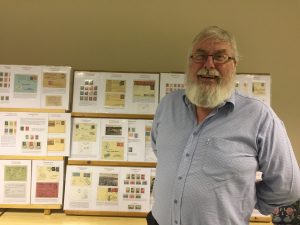 Peter began by explaining how his interest in Yugoslavia started from an unplanned inter-rail visit in the 1970’s and the stamp collection developed later.

The country that came to be called Yugoslavia came into existence at the end of the First World War as the ‘Kingdom of Serbs, Croats and Slovenes’ ruled by King Peter.  The region had been part of the Austro-Hungarian Empire and so the first stamps were overprints.  The first national issue featured a portrait of King Peter. His successor was King Alexander who also featured a number of times on the stamps.  Ethnic tensions lead to Alexander assuming direct control of the country in 1929 and formally naming it Yugoslavia. He was assassinated in 1934 and the stamps of the day were re-issued with a black border.  He was succeeded by his 11-year-old son Peter under a regency during which the country came under pressure to align with Italy and Germany. 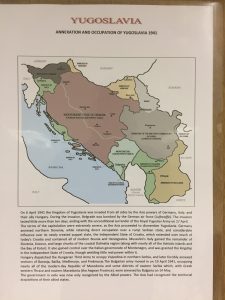 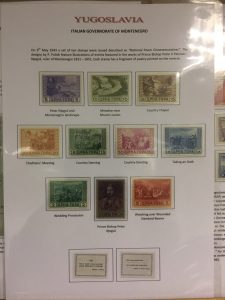 Despite signing an accord, Yugoslavia was invaded and broken up in WWII and in the second half we saw the overprints and new issues in the various regions under the different occupiers – Italy, Germany, Hungary, and even Bulgaria, with Croatia ‘independent’ under the oversight of Germany.

The next event will be ‘Hong Kong & the Treaty Ports of China’ on Tuesday December 14th at 7:30pm at the Hanwell Fields Community Centre. The Banbury Stamp Society is on-line at ‘www.banburystampsociety.co.uk’ or contact John Davies on 01295 255831.