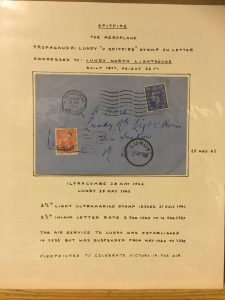 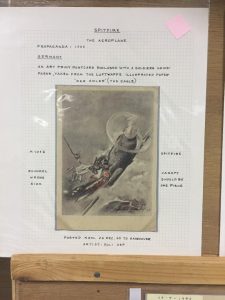 On Tuesday September 21st Banbury Stamp Society opened the new season with their first meeting since March 17th 2020 (our annual dinner for that season).  There was a good turn out for the delayed AGM followed by members present.

The AGM saw the same committee elected for the next season, as well as agreement to offer to host an Autumn 2022 stamp fair.

Members then displayed on the theme of ‘Lockdown Philately’ and there was an excellent variety of material put up to see, including: the 1890 Vienna Philatelic Exhibition, early Victorian stamped overseas covers, Nordic countries, Newfoundland, Malta, a letter from Cyprus in the aftermath of the Turkish invasion, WWII propaganda leaflets and De La Rue Key plates. Apologies to anyone I have missed!

On Tuesday October 5th, Banbury Stamp Society met at the Hanwell Fields Community Centre.  The guest speaker was Richard Wheatley and the topic of his presentation was ‘Spitfire’.

Richard started this collection thirty years ago in response to a challenge, and it has continued to grow since then.  The presentation started in 1913 with the Schneider trophy which was a speed trial for float planes.  In 1927, the event was won by Great Britain and the plane was the Supermarine S.5 designed by Reginald Mitchell.  He revised the design to the Rolls-Royce powered S6 which won the next two events held at Calshot.  We saw contemporary postcards of the planes, copies of the race programmes and a dinner invitation from Henry Royce.  Mitchell went on to develop the Supermarine Spitfire, powered by the Rolls Royce Merlin engine and production was started in Southampton.

The Spitfire came into its own at the start of the Second World War and production was rapidly increased.  Many aircraft were funded through public donation across Britain and the Commonwealth and we saw several examples of fund-raising labels, including South Africa used on letters, and a Manchester Spitfire Tram ticket.

An unusual part of the display was a series of German Field reports from an anti-aircraft battery reporting on having shot down a Spitfire.

We then moved on to stamps and covers commemorating the Spitfire, including the British Post office issue for the 1965 25th Anniversary of the Battle of Britain.

As with all good thematic displays, we finished off with some other Spitfires – covering beer, dragons, books and trains.

The next event will be ‘Antipodean Trials & Tribulations’ on Tuesday October 19th at 7:30pm at the Hanwell Fields Community Centre. The Banbury Stamp Society is on-line at ‘www.banburystampsociety.co.uk’, or contact John Davies on 01295 255831.