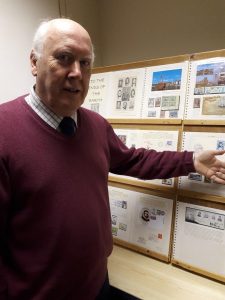 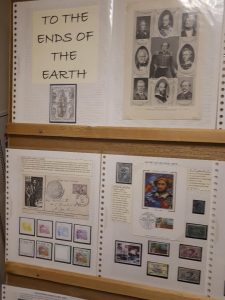 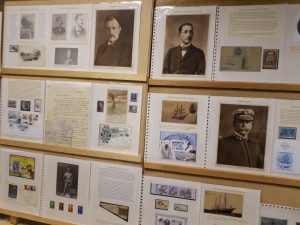 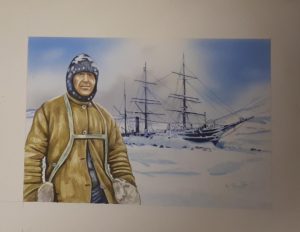 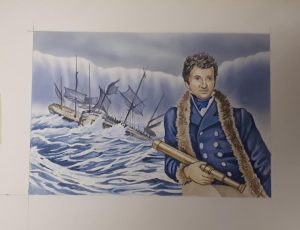 Alan Godfrey gave a talk and displayed his extensive collection of Falkland Island stamps and postal history.  The Islands were first sighted by Europeans in 1590 and named by the British as the Falklands in 1690 and later as ‘Islas Malvina’ by the Spanish – the name being a corruption of the French word for sailors from Saint Malo.  The French, British, Spanish and Argentines settled on the island at various times up to 1833 when the British Government reasserted its claim and set up permanent settlements.  The Falkland Islands flag was shown which incorporates on its crest a sheep as this was the original mainstay of the islands’ economy.

The display started with examples of a ‘paid’ label that was used from 1869-76 to denote that the letter had been pre-paid. This was replaced in 1876 with a red circle ‘Falkland Islands Paid’. The first postage stamps were issued in 1878 with Queen Victoria’s head designed by Hubert Bourne. No steel date stamp was available initially and so many of the early used issues can be found with fancy cork marks. This first issue was used for over ten years with 13 different printings generating a range of paper and colour variations.

The issues for King Edward VII (1901) and King George V (1911) were both based on the monarchs head in a similar style to the Queen Victoria issue. In 1929 the first pictorial definitive set was issued incorporating a whale, penguin and the king’s head, and these were revised for King George VI. Commemorative issues were also made for a variety of events including the 1933 Centenary of British Administration as well as Jubilee and Coronation issues.

Mr. Godfrey included several examples of very fine used stamps which were, in fact bogus: after the war a London stamp dealer offered a service to turn poor mint stamps (heavy hinge or missing gum) into fine used by applying a circular date stamp. The date stamp was engraved by a French woman who learned her craft during the war, and the forged postmark is recognisable from the date: 14 July 1941.

In 1952 the pictorial definitive set was modernised and then re-issued in 1955 with the head of Queen Elizabeth II. A popular wildlife set was issued and these were replaced in 1968 with a floral issue which also saw the transition to decimal currency. The 1986 commemorative issues were shown along with two Argentine occupation covers from 1982.The final section of the display included some Cinderella, bogus and local issues as well as examples of the pre-printed postal stationary (postcards and envelopes) from 1884 to 1917.

The next meeting will be on Tuesday April 21st at 7:30pm at the Hanwell Fields Community Centre (OX16 1ER) when Michael Chapling will be showing Sport on Stamps: Cycling to Gymnastics.